Equatorial Energia is a holding company investing in the Brazilian electric energy sector. Equatorial currently operates in the 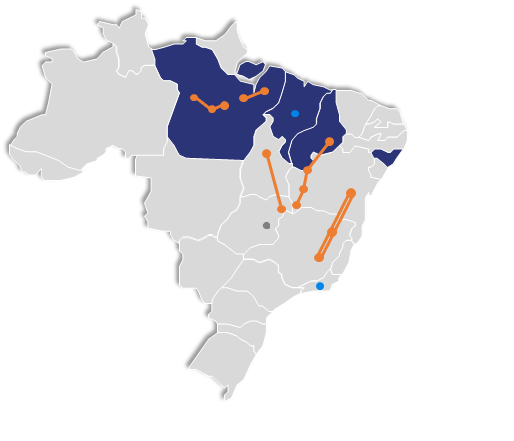 In Maranhão, Equatorial Energia controls Equatorial Maranhão, former CEMAR (Companhia Energética do Maranhão), the State‘s sole electric power distributor, with a concession area of 332,000 km², equivalent to 3.9% of Brazil‘s landmass. Equatorial Maranhão is the second-largest distributor in the Northeast of Brazil in terms of concession area, serving 2.3 million clients and approximately 7 million people, equivalent to 3.37% of the country‘s population.

In October 2018, Equatorial concluded the acquisition of Equatorial Piauí, former CEPISA, single electric energy distribution company covering the State of Piauí. The concession covers 251 thousand km² and had 1.2 million consumers by the end of 2017.

In the transmission segment, the Company has 8 projects concerning the construction and operation of lines and substations won in 2 transmission greenfield auctions organized by ANEEL. The investment forecasted by ANEEL amounts to R$ 4.6 billion and the regulatory deadline for the start of operations is by 2022. The Annual Revenues of the blocks won by the Company amount R$ 850 million, as of October 2016. Furthermore, Equatorial owns 51% of Intesa, an operational line, amounting to R$ 150 million annual revenues in 2018.

Equatorial Energia operates in the generation segment through Geramar, of which Equatorial holds 25% of its controlling stake. Geramar is the company responsible for implementing and operating the Tocantinópolis and Nova Olinda thermoelectric plants, in the municipality of Miranda do Norte, in the state of Maranhão, with a joint installed capacity of 332 MW, providing energy for the National Interconnected System. Authorization for the construction and operation of the Tocantinópolis and Nova Olinda plants was obtained in the A-3 Auction, held in July 2007. In this auction, 240 MW (120 MW from each plant) were sold, ensuring a total fixed annual revenue of approximately R$136.2 million (around R$68.1 million for each plant).

The plants were built by the Finnish Wärtsilä group, under the EPC (Engineering Procurement Construction) system, and are fueled by high-viscosity heavy oil. The start-up was in January 2010.

Equatorial Energia (previously Brisk Participações S.A.)(“Company”) was created on June 16, 1999 by PPL Global to participate in the privatization auction of Companhia Energética do Maranhão (“CEMAR”), current Equatorial Maranhão, which was created in 1958 to distribute electricity to the entire state of Maranhão, as described below. The Company has as corporate purpose the equity participation in other companies, consortia and enterprises that operate in the electricity sector or in related activities.

Equatorial Maranhão was privatized on June 15, 2000 under the federal government’s National Privatization Program (“NPP”), being acquired by the Company, that, at that time, was a company indirectly controlled by PPL Global LLC.

2004 – The Creation of Equatorial Energia

Equatorial Maranhão was created in 1958 with the purpose of distributing electricity throughout the state of Maranhão. In 2001, Equatorial Maranhão began to experience economic and financial problems, posing a risk to the adequate provision of electricity distribution in Maranhão state. On August 21, 2002, the Agência Nacional de Energia Elétrica (“ANEEL”) ordered the administrative intervention of CEMAR for 180 days, which was later extended until May 3, 2004.

ANEEL coordinated the sale of Equatorial Maranhão control as part of its restructuring process. Between October 2002 and April 2004, GP Investimentos Ltda (“GP Investments”) negotiated with Equatorial Maranhão main creditors, which included Eletrobrás and Eletronorte, a restructuring plan for CEMAR that featured capitalization and debt renegotiation. This restructuring plan was approved by ANEEL on February 2, 2004 and was implemented on April 30, 2004, when GP Investments acquired the controlling stake at Equatorial.

In the second quarter of 2005, GP Investments initiated negotiations with PCP Latin America Power Fund Ltd., a private-equity fund owned by the former partners of Banco Pactual, for investment in Equatorial. On March 6, 2006, ANEEL approved the implementation of the corporate-restructuring plan proposed by GP Investments involving Equatorial and Equatorial Maranhão, which allowed the sale of shares representing 46.25% of Equatorial’s capital and the transfer of 50% of its voting shares to PCP Latin America Power Fund Ltd.

On March 30, 2006, Equatorial’s Initial Public Offering was held on the São Paulo Stock Exchange (“B3”). After the offering, Equatorial’s free float stood at 56.8% of its total capital.

This transfer of shares was approved by ANEEL on December 18 and concluded on December 21, 2007. This concentration eliminated the geographical restrictions on Equatorial’s growth strategy, which – previously limited to the North, Northeast and Midwest of Brazil – now encompassed all of Brazil and Latin America.

2008 – Consolidation of a stake in Light

The second stage consisted of the incorporation of PCP Energia Participações by Equatorial Energia, which was approved at the Extraordinary General Meeting held on February 12, 2008. Following the incorporation, Equatorial held an indirect interest of 13.03% in Light through Rio Minas Energia Participações (RME) and, through a shareholders’ agreement, it began to share control of Light. As a result, PCP Latin America Power Fund consolidated in Equatorial its investments in the electric energy sector.

Adherence to the Novo Mercado

The last stage, concluded on April 23, 2008, involved the migration of Equatorial Energia’s shares from the Level 2 Special Corporate Governance Listing Segment of the São Paulo Stock Exchange (“B3”) to the exchange’s Novo Mercado listing segment, seeking the company’s adoption of corporate governance best practices and demonstrating the commitment to transparency in its relationship with investors and shareholders. As a result, the shares ceased to trade as Units and began to trade under the stock symbol EQTL3.

On July 10, 2008, the controlling shareholders of Equatorial carried out the company’s corporate restructuring, which comprised of the successive dissolutions of the following companies: (i) PCP Power LLC; (ii) PCP Latin America Power Fund Limited; (iii) Equatorial Energia Holdings LLC; and (iv) Brasil Energia I LLC. The restructuring did not result in any changes in Equatorial’s ownership structure, since PCP Latin America Power S/A, which already indirectly held a 55.5% interest in Equatorial, maintained the same interest, only now through direct ownership. Equatorial’s outstanding shares continued to represent 44.5% of the Company’s total capital.

Geramar is the company responsible for implementing and operating the Tocantinópolis and Nova Olinda thermoelectric plants, in the municipality of Miranda do Norte, in the state of Maranhão, with a joint installed capacity of 330 MW, which provides energy for the National Interconnected System. The authorization for the construction and operation of Tocantinópolis and Nova Olinda plants was obtained in the A-3 Auction, held in July 2007. In this auction, 240 MW (120 MW from each plant) were sold, ensuring a total fixed annual revenue of approximately R$136.2 million (around R$68.1 million for each plant) in 2007’s figures, yearly adjusted by inflation (IPCA index). The plants began commercial operations in February 2010.

In December 2009, RME, the holding that controls Light S.A, was spun off in three parts, where the shares of Light that belonged to RME were transferred to CEMIG, Andrade Gutierrez and Luce Empreendimentos e Participações (company controlled by Luce Brasil Fundo de Investimentos em Participações). Equatorial remained as the unique shareholder of RME, whereas its interest in Light became 13.03%.

Still in December 2009, Equatorial informed that its controlling shareholder, Fundo de Investimento em Participações PCP (“FIP PCP”), PCP Latin America Power S.A.’s controlling shareholder, celebrated an Agreement for Share Purchase with CEMIG, intending to sell its indirect interest in Light S.A. As part of the operation, Equatorial was spun off on April 29, 2010 and its participation in RME was transferred to a new company – Redentor Energia S.A. (“Redentor Energia”), which was listed in the Novo Mercado segment of B3 under the stock symbol RDTR3. Equatorial kept its stakes in Equatorial Maranhão, Geramar and Equatorial Soluções S.A (“Equatorial Soluções”). In the spin-off process, each one of the Company’s shareholders received one share of Redentor Energia S.A. for each share held in Equatorial.

In May 2011, FIP PCP sold its stake in Redentor Energia to Parati S.A. (“Parati”), a company owned by Cemig and Redentor FIP (“FIP Redentor”), for an amount equivalent to approximately R$6.87 per share. Subsequently, Parati made a public offering to acquire the minority interest of Redentor Energia.

In December 2012, Equatorial completed its capital increase operation (follow-on) in which obtained a net inflow of R$ 1.1 billion of net proceeds through the issuance of new shares priced at R$ 16.00 each. Thus, the Company’s free float amounted to 77% of its total capital.

In the first half of 2015, through two operations in the stock market, the Company‘s free float was increased to 100% of its capital and its main shareholder became Squadra Investimentos, which had a 15% ownership, approximately.

In October 2016 and April 2017, Equatorial enters in the transmission segment by participating in 2 Transmission Auctions and winning 8 blocks to build and operate approximately 2,500 kilometers of lines and 7 substations covering the States of Pará, Piauí, Bahia and Minas Gerais. Total Annual Revenues from these blocks amount to R$ 850 million (as of October, 2016) and total capex forecast by ANEEL reaches R$ 4.6 billion. According to the conditions set by the Auction bylaws, operational start-up should happen by February and August 2022.

In August, 2017, the Company acquired 51% of Intesa – Integração Transmissora de Energia S.A., an operating transmission line, covering 695 km running through the States of Tocantins and Goiás.

In July 2018, Equatorial won the auction to privatize Equatorial Piauí, former Cepisa, Piauí’s energy distribution company, which used to be owned by Eletrobrás. Equatorial has acquired Cepisa’s controlling stake through the payment of R$ 95 million in Grant Bonus to the Federal Government and injected R$ 721 million in Equity in Equatorial Piauí. The deal was concluded by October, 2018.

In September 27, 2018, Equatorial Energia acquired, through an auction, the remaining stake of Integração Transmissora de Energia S. A. (“Intesa”), representing 49% of the capital stock, and became owner of 100% of Intesa’s capital stock.

On December 28, 2018, Equatorial won the bidding auction to privatize Companhia Energética de Alagoas S.A. (current, “Equatorial Alagoas”). Equatorial has increased the capital of Equatorial Alagoas in R$ 546 million and the deal was finished in March 18, 2019.

2021 – Expansion of operations and entry into the Sanitation Sector

In March 2021, Equatorial Energia won the privatization auction of CEEE-D, an energy distributor in Rio Grande do Sul, which until then was controlled by the State of Rio Grande do Sul, and completed the acquisition process in July.

In June 2021, Equatorial Energia won the privatization auction of CEA, an energy distributor in Amapá, which until then was controlled by the State of Amapá.

In September 2021, Equatorial Energia, through the Marco Zero Consortium, won the auction of the Amapá sanitation concession, which until then was controlled by the State of Amapá. The concession serves more than 800 thousand people, and is a full concession (Expansion, Operation and Maintenance of Water and Sewage Systems and Commercial Management), with a 35-year term. The operation is scheduled to start in July 2022.

In June 2021, the Equatorial Group, through its subsidiary Equatorial Geração Distribuída SPE SA, acquired 100% of the shares of E-Nova Instalação e Manutenção Ltda., which will be transformed into a joint stock company, with the consequent conversion of all the shares in shares and its conversion into a wholly owned subsidiary. The amount involved in this operation was R$7.5 million.